The Los Angeles neighborhood known as Silver Lake is filled with rolling hills, winding streets, a cutting-edge music scene and more than a few celebrities. Nestled around a vast, sparkling reservoir, thus the name Silver Lake, it has in recent years managed to hang onto its colorful bohemian flavor while becoming one of the hot, trendy destinations for homebuyers and architecture fans.

Located five miles north of Los Angeles, Silver Lake is not a typical destination for tourists who are instead drawn to better- known sites in Hollywood, Venice Beach and Beverly Hills. But it is a mecca for architecture fans. Pilgrims come from all over the world to view Silver Lake’s wealth of classic modernist homes built by Richard Neutra, Rudolf M. Schindler, Gregory Ain, John Lautner and Harwell Hamilton Harris.

Los Angeles has perhaps the most complete collection of mid- century modern architecture in the world. And for its small size, Silver Lake has one of the area’s highest concentrations of the style. It’s a perfect daylong tour by car on quiet lazy streets.

At first glance, Silver Lake architecture seems to be dominated by Spanish Colonial and Mediterranean styles, but don’t let that fool you. Tucked away among these equally striking structures are exquisite examples of the modernist style that would come to dominate the work of a generation of architects.

Many of these architects working in the ’50s and ’60s saw a postwar housing boom that they felt could also be a champion for modern design. Their designs are characterized by minimalism — lack of ornamentation, simplicity in materials and form, flat roofs and an emphasis on indoor-outdoor living. These houses and even a handful of office buildings and schools are currently the rage as new generations of fans discover and come to appreciate their elegant, straightforward design. 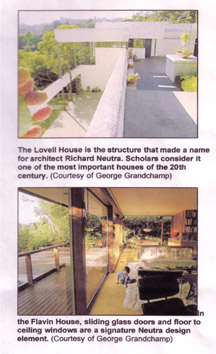 My interest in Los Angeles architecture, specifically the work of Richard Neutra, was kindled by friends and former Chicagoans, Dana Balkin and George Grandchamp, who live in the Flavin House (houses are often named after the original owner), built in 1958 by Neutra (pronounced NOY-tra). Located in Silver Lake on Neutra Place, it is one in a colony of eight homes by the architect. It’s a rare chance for architecture enthusiasts to see a unique concentration of an architect’s work in one blocklong walk.

In 1949 Time magazine put Neutra on its cover and ranked him second only to Frank Lloyd Wright on a list of American architects. Between 1927 and 1969 Neutra designed more than 200 houses in the Los Angeles area. The houses were coveted by the likes of author Ayn Rand, designers Charles and Ray Eames and many Hollywood stars. Neutra’s striking works of art are scattered throughout California and include the Kaufman House, a modernist masterpiece in Palm Springs.

“I love living in a Neutra not only because I feel I’m living in a piece of architectural history but the simple beauty adds peace to my everyday life,” said Balkin, whose interest in modernist design includes furniture, lighting fixtures and art.

But residing in a house that’s considered a must-see destination by some, can be a challenge. Balkin and Grandchamp laugh about the droves of Japanese tourists or about the group of Austrian architecture fans who were lucky enough to be invited into the house on the spur of the moment for a quick tour.

“Yes, there’s a constant flow of people,” said Grandchamp, with good humor. “On weekends, you’ll always see someone coming up the front walk to get a better look at the house. It’s just something you live with when you have a house like this. And with all the floor-to-ceiling windows, you just make sure you always have clothes on.”

The modernist architects wanted their houses to be machines for living, simple, pure and functional. Neutra, with his open floor plans, massive sliding glass doors, attention to storage, warm veneer finishes and concern for the outdoors, was a master at creating an inviting living environment.

From the very beginning, nature played a major role in L.A. modernism. Neutra and his contemporaries embraced the notion that architects must fully address the site on which they’re building, be sympathetic with the terrain and the vistas, and incorporate nature into the design rather than separate it from the house.

Nature plays an evident role on Neutra Place, where the homes are built up a hill on two levels all with a view of the Silver Lake reservoir. All sorts of plants and trees surround the structures like a pulsating green army. Slide open the glass doors that are a Neutra signature, and you have classic California indoor-outdoor living.

“You breathe green in a Neutra home,” Grandchamp said. “And you don’t have to have plants on the inside to do it. Here you live with nature and sunshine.”

The eight houses in the colony vary in size but all hold true to Neutra’s design style; many have flat areas, like the roof of a garage viewed from a living area, that is meant to be filled with a thin layer of water and serve as a reflecting pool.

Four of the houses are best viewed from Silver Lake Blvd., as Neutra Place runs behind them. The other four, including the Flavin House, are viewable from Neutra Place. Nighttime might seem an intrusive time to go on a tour but it’s then, with all the glass windows, that you play voyeur and catch a glimpse of the inside design of these homes.

After absorbing the quiet beauty of the houses on Neutra Place, take a short walk down Silver Lake Blvd. to the V.D.L. Research House (2300 Silver Lake Blvd.). Originally built in 1932 but destroyed by fire and rebuilt in 1963, it was created by Neutra and his son, Dion, as a means of experimenting with new materials and ideas.

Now owned by California State Polytechnic University, it is open for tours by appointment. Director/curator Ken McCown, a professor of landscape architecture, lives in the guest house at the back of the property and gives extensive, informative tours, explaining every detail and creative thought that went into the house’s creation. (For tours, call 323-953-0224 or e-mail kmccown@csupomona.edu).

The significance of the house was recognized in 1999 when it was named one of the World Monument Fund’s 100 Most Endangered Sites. It was an important step toward acquiring funding for the architectural landmark that, like many older homes, has a long list of repairs in its future. Advertisement

The expansive V.D.L. house takes in the entire landscape that surrounds it. During a tour, McCown describes Neutra’s goals with the placement of windows, doors and built-in furniture. The architect was always in tune with the day, McCown says.

“He liked to awake with the sun on him and look out the window and see the hummingbirds and plants,” McCown explained. “He liked to watch the sun set over the west and the moon rise in the east.”

McCown also offers fun trivia about Neutra. It seems he liked to let his body adjust to the day and often worked out of his bed in the morning.

“He used to put a tie on over his pajamas so he would look a little more official when his clients came in,” said McCown, laughing.

From the peaceful upper balcony, viewers can see Silver Lake and, on the opposite side of the reservoir, John Lautner’s stunning Silvertop House (2138 Micheltorena). Since it is not visible from street level, this is a good way (bring binoculars) of getting a long-distance look at this famous structure.

“That’s one of the most expensive houses ever built in terms of cost per square foot,” McCown said. “It’s got all these crazy concrete cantilevers. The most daring is the tennis court, which is built to look like a diving board. I don’t know how that behaves during earthquakes.”

On the edge of Silver Lake atop a Los Feliz hillside is the Lovell House (4616 Dundee). Finished in 1929, the house, built for Dr. Philip Lovell and his wife, Lea, is the structure that made a name for Neutra. It is considered by scholars to be one of the most important houses of the 20th century.

Neutra based its design on skyscraper technology he studied in Chicago and New York. At the time, it was the first all-steel- framed residence in the country. A whitewashed masterpiece, it cascades down a steep ravine.

Driving up the hill, you’ll think all you can see is the garage, but continue on to the end of the road for a view of the entire structure. The visible top floor of the Lovell House is connected to the street by a gangway. Levels one and two can be viewed peering through a border of scrub trees at the edge of the road. If it all looks familiar, that’s because the 4,500-square-foot residence was used as a set for the movie “L.A. Confidential.”

The Lovells were a progressive couple and devout health advocates who had a specific vision for the design of their house that included outdoor exercise areas and sleep-in porches. In the home’s free-flowing plan, Neutra designed open, spacious rooms with high ceilings and walls of windows; a grand staircase connects the upper level to those below.

As his career flourished, Neutra developed his own ideas about fitting a house to its owners. He often would stay with a family in their current house to observe how they lived. He saw himself as a diagnostician and would even hand out questionnaires to get a better picture of the minute details.

“Neutra was always interested in how the eyes and brain interacted with a perceived space,” McCown said. “He felt that houses were like cars; you chose the one that fits you best.”

Viewing these houses from the outside whets the appetite for a closer look inside. While some homeowners gladly will give an impromptu tour now and then, many others don’t even want their house photographed, but this is completely legal from the street. Always remember, respect and diplomacy can sometimes work wonders and open closed doors.

Not just Silver Lake but the entire Los Angeles landscape has become a hot destination for architecture fanatics. From the gleaming, sculptural facade of Frank Gehry’s Walt Disney Concert Hall to Robert Derrah’s 1937 Coca-Cola bottling plant that’s shaped like an ocean liner (portals and all) to the houses of the modernist architects, there is definitely something to fit everyone’s agenda.

The key is to purchase a good guidebook and hone in on one area, otherwise your architecture tour will become overwhelming and unwieldy. And always remember, traffic in L.A. can be horrendous at any time of the day, so plan well.

The ultimate bible is David Gebhard and Robert Winter’s An architectural Guidebook to Los Angeles (Gibbs Smith, #24.95). The hefty 543-page book opens with an informational reader-friendly history of L.A. architecture and includes segments on historic preservation (there’s a lot of this going on here), city planning and landscape architecture.

Covering every style — Victorian, Mission Revival, Arts and Crafts, Beaux Arts, etc. — by a long list of name architects, the authors also pay attention to work by a new generation of architects as well as new landmark buildings including Rafael Moneo’s Cathedral of Our Lady of the Angels, “one of the most beautiful spaces in Los Angeles,” and Morphosis’ Diamond Ranch High School, a revolutionary design that is a hot attraction for students and tourists.

Smith, an architectural historian, has been giving guided tours for well over a decade and has packed this knowledge into these books that feature color pictures, casual commentary and helpful maps. I found the Silver Lake book indispensable on a self-guided driving tour in search of modernist houses.